by Gps
I have been listening allot to house (old school) mixes, and try to make a beat like that in LMMS, but seem to fail again and again.

I wonder if my problem comes from not knowing the name of drums very well.

The trouble I have is the shh shh ssh sound.
Are that high hats or not ? Nothing in lmms seems to sound like this ?

I expect I am looking at the wrong spot though, or totally misinterpret what I hear?

The kick is easy its 4 to the floor. Then I hear a clap but its probably layered ?

I hear this type of beat allot in house mixes. I even wonder is some part is programmed into the mixer not coming from the records ? .

One track from the mix.

This is driving me nuts.

by DJB
The offbeat percussion in the beginning is definitely hi-hats. There is a difference between an open hi-hat sound and a closed hi-hat sound. I believe LMMS comes with several hit-hat samples. There is also a lot of random percussion thrown in as well. I would encourage you to take a look in the LMMS Samples catalogue, and check the sharing platform on the site as well. They have several samples, presets, projects, and etc. for you to enjoy.

Long highhats, close to 'crashes' , but then HP-filtered, and some 'bump' in it. I think like a reverse next to a normal, and then it fades
But the real Q is properly "On what beat and what tick"
How is that 'drive' build?
I think the answer is as with the driving bass in trance: velosity differences in notes very close to eachother.
I have not done anything in that old-school funk, meigt be fun trying to get that 'Drive' -or is it Jjive -It all comes from jazz, no doubt :p

by Gps
Thank you.

You say long hi hats, now that one problem I am having. I have tic tic instead of a tshhh tshhh sound.

Gonna have a look in the extra hats folder

And the HP filter

I think that was something else I was missing.

Been trying to add a reverse hat, but gonna do some more trying, now I know I was on the right track.
Also tried a shaker.

There is definitely a drive. Almost all house tracks have something like this.
All about the bass line and percussion.

And yes its funk related, like the good disco was. Or should we say is?
Daft Punk, Disco never really died ?

Did not know that funk comes from jazz though.

https://www.youtube.com/watch?v=TBXv37PFcAQ
Too funny that vid from soultrain over it, but a great example of funk disco, but not from the 70 ties, 80 ties ? like the vid.
And of course a syncopated guitar.

Also gonna see what I can do with the velocity.
I think I hear something, that velocity changes can do.

( Its funny, have made some type of house track , and I am pretty happy with it, but not with the percussion which I want to sound like the examples I gave. )

by Gps
Already some progress.

Used Dusty simple hh, Twice, one in reverse, and I moved the notes of the reverse one 1/64 to the left in the piano roll.

Then a little fiddling with the start point of the reverse one (on the audio file processor), to make it sound as one sound.


And there we have this over the top ? but typical house tsssshhhh tsssshhhh sound

Now lets add an hp, and see what we can do with the velocity.

by Gps
The more I listen to the original house, the more I start to wonder about that off beat Hi hat.

Every thing seems to point to timing. Almost like it starts too early.

In lmms I still have two hi hats.

One in reverse starting before the other one not in reverse.
Had to move the notes of the reversed one, to the left in the piano roll, to achieve this.
For now happy, with that track, it has now a house type percussion.

Or is it because the kick is compressed and has allot of attack ?

I hear different hats, but only the off beat one sounds timing wise weird. ( but great

)
What is happening here? Is it in reverse ?

Or am I on the right track by using two hats, for that one sound ?

Is that Brodance complicated?
I get 118 bpm and then its something like 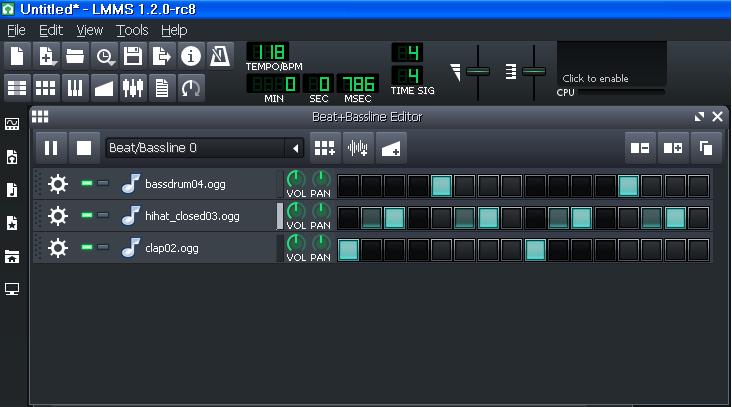 Nah i made a dodoo. Theres kick on all beats, not just every second :| -sorry

by Gps
Oh my god, gonna try that. That must be it.

This type of house, is 4 to the floor, nothing special there.
Then an off beat hi hat, but that hi hat is not standard.

Not just in this track. and It seems to be how to get that house groove.

There is often an 8 beat long loop, often using some kind of question an answer.

Then there always seems to be a funk bassline. ( the disco roots )

yes this one is simple


Then there always seems to be a funk bassline. ( the disco roots )

I threw a little groove in with the beat. You can hear it :
https://soundcloud.com/musikbear/brodancepercussiongps

by Gps
I like it, that is 100% house. Also that small pause ? or is that called syncopation ? in the loop.

The clap with lots of reverb.

Then that other sound. timing wise totally house.

Its too funny, I have been trying to make house for months, and only now have seen the light.
I knew I was over doing it, but could get my finger on were I took a left turn.

The main difference between most track is only 4 beat or 8 beat loop.
Because house started from disco mixes with a drum machine its easy to see, were that loop comes from.

The best part of a disco track was looped over and over, over a drum machine beat.

I went to my hi hat in the bbe. Added a note in front, and lowered the volume. Like the pic from musicbear.

When I listened to it I was already quite happy. it even adds a bit of funk.
Then went into the piano roll and set Q to 1/64.
Then moved the in front note 1/64 to the right.

This worked nice because now the two hat hits, sound like one long hit.

I can see myself also use this without moving that first note. That already gives a very interesting (house / funk) effect.
Need to do some more listening, on what I like best.

Then probably finish current track I am working on with a house beat.
All times are UTC
Page 1 of 1
Powered by phpBB® Forum Software © phpBB Limited
https://www.phpbb.com/